Creating a Better Future for Morgan

Previous Next
Creating a Better Future for Morgan

For the past two years I have had the privilege of sponsoring a wonderful 10-year-old Zimbabwean boy, Morgan, who is currently in his final year at Chitakatira Primary School in the Vumba Mountains, some 25kms south east of Mutare. Thanks to the Reading-based charity Creating Better Futures (CBF), I have been able to have a profound impact on Morgan’s life through the power of education. For Nelson Mandela once said: “Education is the most powerful weapon which you can use to change the world” and it is Morgan’s world – or at least his prospects within it – that my £18 a month looks to provide. In a nutshell this small amount of money aims to provide, through education, the prospect of a better future. 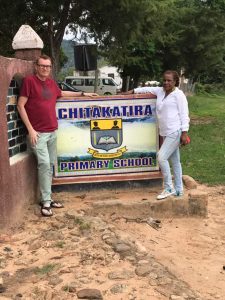 In England and other parts of the Developed World we take education for granted but for children like Morgan this ‘gift’ doesn’t come free. In short if you can’t pay the relatively modest tuition fees you can’t go to school. So if you and your family cannot pay the monthly fees and no one else is able to lend a hand, chances are you’ll probably end up like scores of other children – wondering the streets or most likely trying to sell maize to help provide a little income for your family. This was exemplified by an example of a six-year-old girl me and my wife Alice met on our travels in the beautiful country of Zimbabwe.

Morgan then in the luscious mountains of Vumba – which presents some of the most spectacular views you’ll ever see – is surrounded by beauty but trapped by poverty. I wanted to see for myself the conditions that Morgan lives in, learn a little about his story and see how my donation to CBF is making a difference. So when me and Alice went to see our family in Harare for two weeks over Christmas and New Year, we knew that as well as the trips we had planned to Bulawayo (Zimbabwe’s second city) and the world-renowned Victoria Falls, we just had to meet my ‘adopted son.’

To be honest, I have travelled to Africa before. I had seen with my own eyes the poverty in both Malawi and Zimbabwe but have always been touched by the resilience and ingenuity of so many with so little. I had also seen the stereotypical images of hunger and pain on TV screens. But getting up close and personal with someone who is living that life is different. It is all the more emotional when you have in some way been playing a small but significant part of their life.

I knew that Morgan didn’t have much by way of possessions before I set off from England so I bought him some basics and some ‘treats.’ The basics consisted of pens, pencils, shower gel, toothpaste, toothbrushes and the luxuries were a Champions League football, an FC Barcelona rucksack and hat as well as an assortment of clothes which included what was most likely his first pair of trainers. 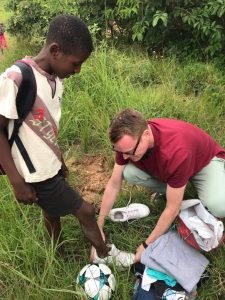 Our guide Dean showed us the way to Morgan’s home high in the Vumba hills. I was nervous at meeting Morgan, a little embarrassed and not quite sure what to say or do. I didn’t want him to feel a charity case or obliged to even say ‘thank you’ for something that I had always taken for granted – education. At the moment Dean presented Morgan and his older sister Patience (who is awaiting her GCSE results and aspires to be a doctor) as well as his grandmother (we later learnt that Morgan’s father was once a school teacher but lost his sight and now resides nearby in a care home but tragically his mother died some years ago) I could do nothing but hug him.

We then sat around on wooden chairs in the open outside two concrete buildings. One of these buildings – about 5 metres by 5 metres in size – was Morgan’s grandmother’s bedroom. The other building – roughly twice the size – was Morgan’s bedroom alongside his sister’s room. There was no bathroom (an outside shower suffices) and a kitchen had to be shared with others living nearby. There was no flat screen TV, comfy sofas, curtains in fact there was no electricity at all. Morgan was dressed in shabby and torn shorts with a t-shirt and no shoes.  He was soon wearing his new clothes – much to our joy! While talking to him and his small family we noticed he was struggling with his eyes and thought that maybe he had a similar condition that may have eventually led to his father going blind. Morgan had never had a sight test, so we could be sure. Through Dean we arranged for him to make the short journey into town for a $30 eye test which revealed he was suffering from an allergy. He was prescribed some medicine and we hope that these will relief his symptoms.

My wife, being able to speak the native language of Shona, soon learnt that Patience has no funding for her A-level studies and because of no money had to stay with family in Mutare rather than be more independent and take the bus to school. We discovered that Patience is indeed a bright young lady and for the sake of around £190 a term and £10 a week for travel could not let this talented student lose sight of her dream. For the price of less than a coffee a day we can make a difference to Patience too. 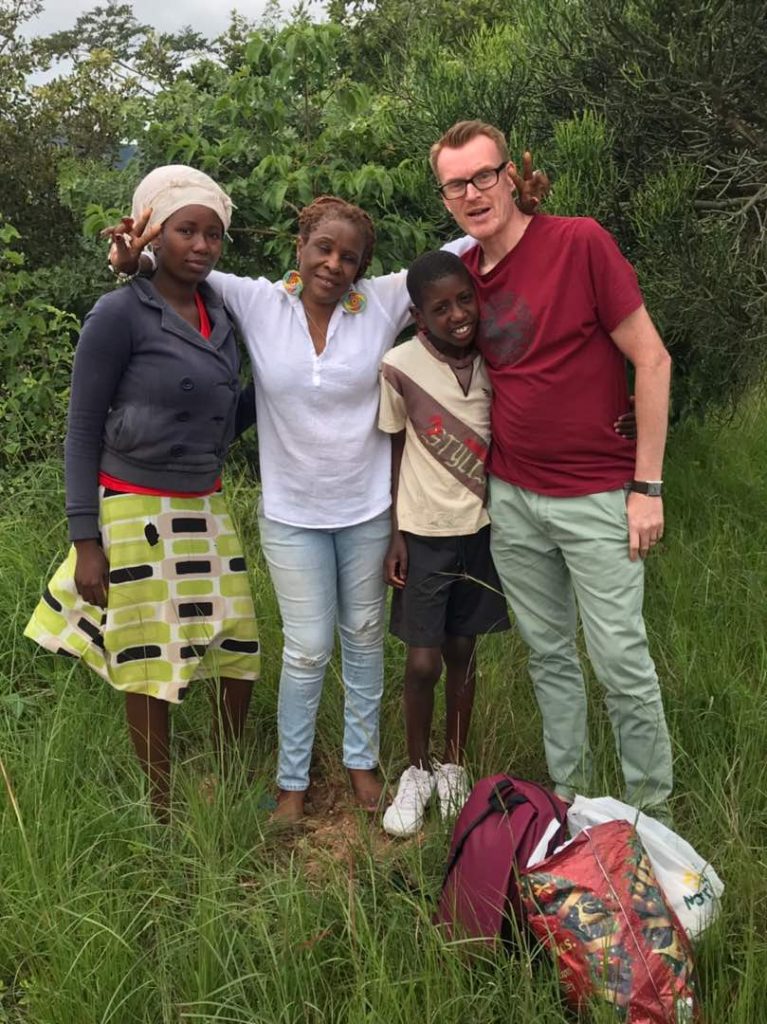 All too soon our visit to Morgan and his family was over. We left with some groceries for grandmother – bread, milk, sugar – the basics but relative luxuries where the staple food is maize meal, probably some greens and rarely meat. My donation through CBF provides one meal at school, teaching and a uniform but I left feeling I could do more not only for him but the other children. When I embark on the Reading Half Marathon in a few weeks’ time I will endeavour to complete it in the name of Morgan and his family as well as all the other less fortunate children in countries like Zimbabwe where education and the chance of a better future is very much valued, not always afforded and never quite secure. Through a small amount of money I and you can make a difference.